If you do happened to get signed by a publishing house, odds are you won’t get the attention you think you deserve. Once you finish your book and actually get it out there your job is just beginning:

“Being an author has become much more of an ongoing relationship with your audience through the Web, rather than just writing a book and disappearing while you write the next one,” says Liate Stehlik, publisher of William Morrow and Avon Books. “You have to be out there in the online world, talking and participating.”

Authors are expected to behave like mini-entrepreneurs, says Kamy Wicoff, founder and CEO of She Writes, a Web site devoted to helping women writers promote their books. She started the site in June. More than 4,000 writers have joined.

Everybody’s heard of press kits, but the aim of a Blogger’s Kit is spreadability–images and videos that are easy to embed, post, disseminate on the web.

Here is a sample from Austin’s kit for his newly released Blackout Poems: 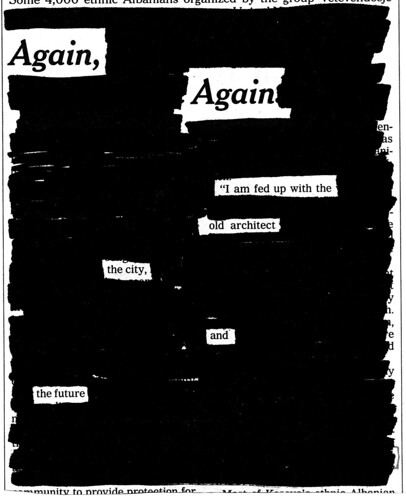 I pick Austin as an example because he is a fairly savvy web personality whose work is intrinsically connected to paper. He understands that paper can be exploited in ways that HTML and CSS cannot, but sees the web’s power of “spreadibility“, or what the social media gurus call “marketing” and the rest of us call “conversation.”

1 thought on “New Authors and the Web”